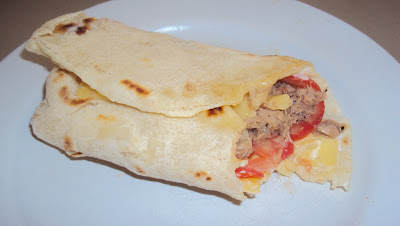 This morning I woke later than usual, around nine, came down to the kitchen grabbed the toaster, put the kettle on and reached for the bread, ohhhh only a crust left in the packet.    Of course I have no one to blame but myself,  why did I put the pack  back in the cupboard, I don't think I'll dwell on that to long,  I might think I'm going mad, ha ha.     Next thought was to make a loaf of bread but that would take far to long, I decided to make a pita.    I love home-made pitas, so easy and quick to make, I don't know why any one would buy them.    It was only after I had the last one in the pan I thought of the photo opportunity, I'll give you my recipe anyway.    I searched the fridge and the only thing to put on these, tomatoe, canned tuna and cheese, I did make a garlic dressing to go with this and I placed it back on the hot pan to toast it and to melt the cheese.    After I had eaten one, which was definately enough I kept looking at the other one.     I've wrapped it up and put it out of sight or I will eat it.     I really do need to do some shopping but not today, I plan on sitting and sewing this afternoon.

Pita
This recipe makes two or more depending the size you want:
3/4 cup of plain flour
pinch of salt
1/4 tsp baking powder
1 tsp olive oil
Enough hot tap water to bring it to a soft dough.

Mix all the ingredients together, knead for a few minutes, seperate the dough to form two balls and let sit for about 10minutes.  Roll them until they are a thin circle or close enough to a circle, place into a dry pan on a medium hot heat.  You will see them bubble up, leave for a minute or two and flip, repeat on the other side, check they don't burn.  It took me several attempts to get these just right, and just like pancakes the first one is not always successful.  Depending on your stove it may take several attempts to make these successfully.
Posted by Unknown at 20:27