In stitches over stitches 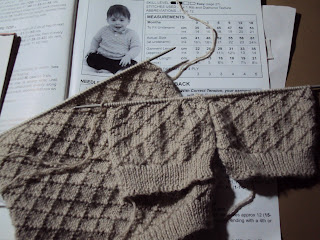 Continuing saga of the knitting, who would have thought a little boys jumper would give me so much grief. When I chose the pattern I looked through it and thought ok, I can do this, but, I've pulled it out so many times now, I've thought about throwing it in the cupboard and giving up.   My mum was a great knitter and she also did a lot of crocheting,  I can hear this tiny voice inside my head saying "don't give up, try again".  So I will even if it kills me, lol,  I have a deadline because this little boy is growing fast and if I don't finish,  it will not fit him.
Posted by Unknown at 03:44 No comments:

I have a large container in the spare room that holds the toys for my grandsons to play with when they visit. Some of these belonged to my children when they were younger and some I have purchased since my grandsons arrived. I had kept a bucket of Duplo blocks with cars and trains, these pieces all hook together to form a long train.  Isaac played with these when he was visiting a couple of weeks ago, he enjoyed making a plane from the blocks and varooming around the room with the cars.   Deacon hadn't shown much interest in these until he watched Isaac play with them, and now it is the first toy he takes from the container. This afternoon while my daughter was running errands I sat and watched and listened to him while he was engrossed in his game. I had to smile, something as simple as chasing cars around the floor had him totally enthralled.
Posted by Unknown at 05:08 1 comment:

I  awoke to a dreary wet morning today, while it's great to see the rain I know that winter is just around the corner.  I'm not a winter person, I love to see some sunshine in the morning, it was clear and sunny this afternoon but,  that's not the same as waking up to a bright morning.  I was going to sew today but my daughter Jacinta and her partner worked night-shift last night, so while I was creeping around the house trying not to make much noise I thought it would be a better idea to go out.  I rang my daughter Taneesha, who was home from work,  we decided to do some scavenging through the op shops. Taneesha picked up several bargains, the best being two small casserole dishes with lids, still in their boxes. While searching through some things she called me over to see what she had found, a punch bowl with the cups and ladle. I had to laugh because it looked just like the one I had given away before moving into this house over three years ago. I had'nt used my punch bowl for so long that I thought I would'nt need it. Now, why is it when you have a clean out and get rid of the things you no longer use someone wants them. The girls have been making  punch ( alcoholic or just fruit) at the various family functions we have had recently, and have resorted to using a salad bowl and drinking glasses. I was talked into buying this today, I don't know where I'll be putting it. I just hope they continue to make a punch and use the punch bowl. 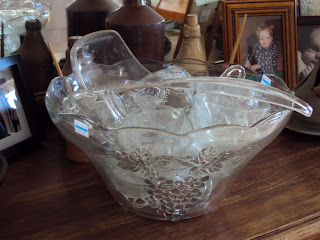 Jacinta was excited to see it when she came home, and so, I think I have a home for it.
Posted by Unknown at 01:44 2 comments:

I've recently noticed a strange smell in the corner of my bedroom, after searching for any food scraps that my grandson DJ could have dropped and finding nothing,  I've begun to wonder if I have a dead mouse or a rat in the wall cavity. We have had a mice plague here in Victoria over the past few months,  so I asked my daughters fiance to put some bait in the ceiling, which is why I think  this could be the reason for the smell.  I guess I'll have to put up with it till it goes, maybe buy some flowers to mask the smell.

I called into the local fabric shop today and found the perfect colour for the fairy quilt, they also had the fabric I used in the blocks, handy to know if I need more, now to cut out the applique pieces, the task I did'nt like too much.  Taping the pattern and freezer paper to the window and standing for ages to trace was definately hard work.  Not now though, because, I received a lightbox as another of my birthday gifts, this will make tracing so much easier. Thankyou to my sisters.  Last October I started handpiecing star blocks for a quilt for my grandson Connor ( who asked for sparkling stars)  I knew I would need something portable to stitch while I was staying in Sydney during the birth of my youngest grandson Noah.  These were put aside before christmas, so today I took them out and found I have enough blocks to sew the top, which I hope I will get time to do tomorrow after craft group.
Posted by Unknown at 05:28 No comments:

﻿﻿﻿
﻿﻿﻿ Last year I was diagnosed with Addisons decease, which is an autoimmune decease of my adrenal glands. I was very sick and underweight for a long time before this was discovered. It was after a few day in the Intensive Care unit of the hospital, before I was told what had been making me so lethargic and unable to eat for so long. Now I take a couple of  different cortisone tablets every day to compensate for what my body does'nt produce.  One of the gifts I received for my birthday recently was a Breville juicer. I had been watching a documentary called "fat, sick and nearly dead" where Joe Cross who also has an autoimmune decease,(not Addisons) decided to give a juice diet a try. He decided to exclude all food except juice and found that he lost a lot of weight and no longer needed his medication. This documentary now has a worldwide following. I might add this was done with medical supervision.  I had a checkup with my doctor last Thursday where I discussed this with him, we came to the conclusion that I would need to add some protein and maybe some lowfat dairy. I have decided to replace two of my daily meals with a juice, one being a vegetable and the other a fruit. What harm could it do, after all I will be eating more fruit and vegetables than I have for a long time. My morning juice consists an all green juice with an apple, a small piece of fresh ginger and half of a lemon. I was pleasantly surprised to find that I liked it. My lunch is a fruit juice or a low dairy smoothie of whatever combination I fancy.  I am on day five and  finding this a lot easier than I thought I would. My night meal is lean meat, chicken or fish with vegetables or salad.  I know I won't be able to forfeit my medication like Joe, but if it makes me feel better I will be happy. Will let you know how long I last.
Posted by Unknown at 19:38 No comments:

Today has been my only day at home this week, so housework was in order. I did get quite a bit done, vaccuming, changing sheets and cleaning the toilet and bathroom before my daughter Taneesha and her 2yr.old Deacon arrived for lunch. It's amazing how much mess a little one can make, after they left I had to clean the kitchen floor again. Always good to see him, though, he is becoming so stubborn, just like most two year olds, who want to do things their way or not at all.  I was hoping to get some stitching done this afternoon, but have just looked at the fabric I bought last week, to be used for the applique border on my sisters quilt and it is'nt the colour shade I wanted.   I will need to take another trip to the quilt shop, this time with my swatches.  So I'm  picking up the knitting I have'nt touched since last week, I need to concentrate on the pattern, so have to be alone to knit it. Will try to include a sneek peek of the fairy quilt.
Posted by Unknown at 01:08 No comments:

Since my last blog so much has happened, I turned 60yrs old last week and to celebrate this milestone my son Darren, his wife Renee and young sons came to stay with me from interstate. It was wonderful to spend time with them as we only see each other a few times every year. I had a small party in my home with my other grown children, grandsons and my extended family. It was a lovely night, which past much too quickly. So now I'm looking forward to receiving my senior citizens card in the mail, lol, might be a few more visits to the movies on the discount this card offers.  Darren and his family stayed for six days and before I knew it, it was time to drive them to the airport and say goodbye once again. This week I've also been concentrating on sewing the quilt which will be for my youngest sister Kerri, she is still mad about fairies, so I've been embroidering and appliqueing hoping to finish this before her next birthday.
Posted by Unknown at 23:54 No comments: