One of my grandsons had a sleepover last night, after breakfast I brought out the playdough to keep him amused, just so I could get some washing and cleaning done.     I was amused to find that he had made playdough pies on plates for us for lunch, it has been awhile since I had to pretend to eat some playdough. My two daughters were always playing pretend and I was often involved with their play.     I suppose because I was also a female I found this a lot more enjoyable than playing pretend fights, lego, or cars with my sons.     On a few occasions that I joined in with their play I was physically hurt.     Like the time I was helping to build a tree house, I kept asking them to be careful so they didn't fall from the tree.    Guess who fell from the tree flat on her back?  yes that would be me.    At first everyone, including me were shocked, and then the laughing started oh yeah, they laughed at their mum laying sprawled on the dirt.   I wasn't seroiusly hurt but that was the end of my help.
While I sat and played with Connor today he talked non stop about anything and everything.   I have just realised that much hasn't changed, but maybe because I'm older I find their constant chatter more tiring, or maybe I have just forgotten.    While out shopping  I found these little pots of playdough at KMart for just 50c a pot, a great find for a grandma looking for something to add to her box of things needed to amuse the grandkids. 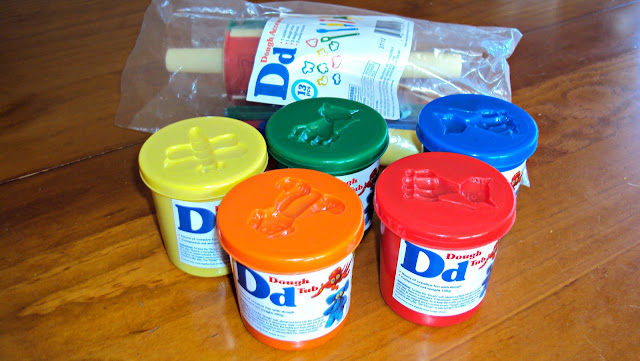 Unfortunately I can't show you the photo I took of Connor with his creations, it was on my phone and I can't upload it to my computer .
Posted by Unknown at 20:53