It's that time of the year when I want try a few of those Christmas sweet things that are appearing on Facebook, you know the ones that put on kilo's but taste so, so good.   To amuse Deacon for awhile this afternoon,  while my daughter was doing some Santa shopping,  I thought he could help me make some cherry ripe chocolate balls.    While he broke a packet of Marie biscuits into the food processor I measured the cocoa and then we got to the fun part, we both broke five packets of cherry ripe bars, put them in with the biscuits and blitzed the mix till fine crumbs.   We had a taste test of the cherry ripe bar, just to make sure it was yummy and  while I stirred  the condensed milk into the mixture I gave him a spoon to eat the remains of the condensed milk from the can.      All the while he was chattering on about what a good cook he was, and how mummy lets him help cook as well.     I had some fun watching him help me roll these into little balls, but with chocolate sticking to his hands he decided he had done enough after rolling two balls, and asked me to wash his hands and put a movie into the DVD player for him, Despicable Me 2 is currently his favourite.  The verdict on the cherry ripe chocolate balls, very yummy, but I like the balls I dipped in white chocolate more. 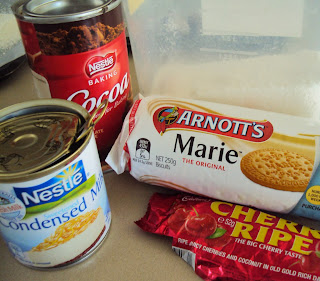 Break the biscuits, add to the food processor with the cocoa and cherry ripe bars, blitz till crumbly.
Place into a large bowl and add the condensed milk, mix well, then roll teaspoons of mix into balls then roll the balls in the coconut or dip into melted chocolate. Leave them overnight if you can, they are much better. 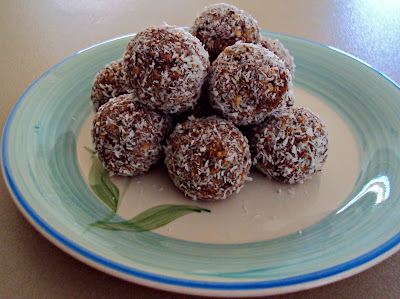