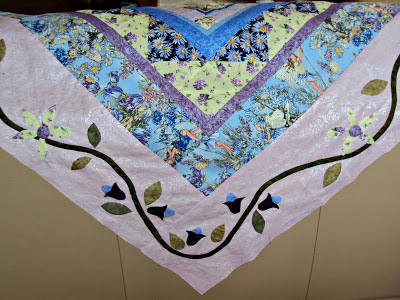 I had a lovely day yesterday, I spent the day with the son that does everything.  We did'nt do much, mostly I just tagged along while he was sent from one place to the next.  It started as a simple thing, build a patio at the back of a house, even though it would be free standing he would need approval from the local council to erect the patio, who then said because of an easement along the back of the property,  he would have to check with our water authority and get their approval.  Then we were sent to a draughtsman who would draw plans with the design and  position of the patio, including the slope of the block.   In the end this simple patio was going to be an expensive excercise, each of the authorities wanted a fee, the most expensive would be the draughtsman who would draw the plans, something in the region of $600.  I wonder what the cost of building something larger would be.
Today I have been sitting sewing some applique flowers around the outside border of a quilt for my sister, I have to finish this quilt, it is my sisters birthday in January and I would like to give it to her then, she is crazy about fairies, her bedroom has paintings of faires, ceramic fairies, and she wears jewelery with fairies.  This collection has now invaded her living area, fairies everywhere.   This is the quilt I pick up when I just want to relax, once the applique is complete I have a little embroidery to do, then I'll be able quilt it and have it finished.  I still have two quilts to finish for my grandsons.  So much to do, so little time.
Posted by Unknown at 20:28