The adventures of a quilt 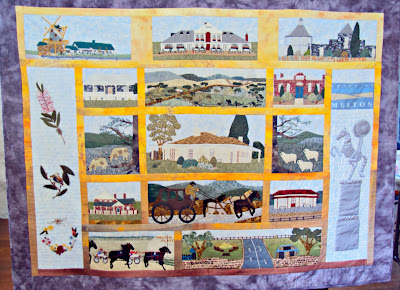 My quilting group, The Willows, and I have been disappointed and saddened to find a quilt that we had sewn as a group,  was being used to cover a childrens sand pit in a community kindergarten.    This quilt was made and presented to our Shire Office, to be hung as a community quilt,  and it was for a considerable amount of time until it was found to be fading by light from a nearby window.     It was removed to be placed in another room.  Over time we had wondered about this quilt, and it's whereabouts but had never followed up to find where it was.   Many hours were spent in making this special quilt, from taking photos of the buildings of  importance in our area, having the patterns developed,  finding suitable fabrics, deciding on the design of the quilt and then nominating who would sew each block.  We were very proud of this quilt, we had achieved this as a young, recently formed quilting group.   We were formed in 1997 and this quilt was planned during the following year,  I was one of the team chosen to be apart of this quilt, my block consists of  trotting horses during a race,  our area is home to Harness Racing and at that time I had a friend who was involved in this industry.    I thoroughly enjoyed working on this block, and was very proud of my efforts.  Phone calls have been made and the quilt has been rescued, cleaned and returned to our group.  Further enquires have followed and it appears that it will have a new home with the Heritage Society where it will be hung for display once again. 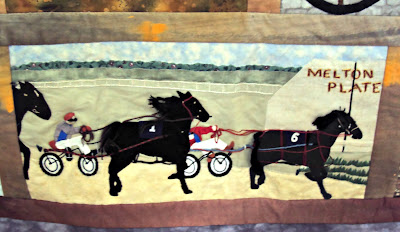