Yesterday was one of those amazing days you have with friends, we celebrated Christmas in July, something I have never done before.     It was a fantastic day full of laughs and of course Christmas food, decorations and presents.     I have decided that I love Christmas in July, a day spent with the friends I do not see over Christmas in December.      As I've mentioned before we have been friends for a long time but all live quite a distance apart, and thankyou to Facebook we have been reunited and now get together every few months.    Yesterday was spent on the coast with Sharren and Steve, our hosts for the day,  they live in an amazing place with the beach just a couple of blocks away.     They also have a wonderful garden complete with Australian plants, with fruit trees, vegetables and chickens.    Steve had roasted a piece of pork on the Bbque, it was melt in your mouth yummy, we also had roast vegetables taken from their garden, gravy and apple sauce.    My sister had brought a plum pudding and an another friend had made a trifle.    We had christmas crackers with  party hats and awful jokes, and  little fruit mince tarts,  then after lunch with very full stomachs it was time to open the gifts, we had set a limit of $10 on each gift so it would be a token gift perfect for the day.     My friend decided to have some fun and make this steal a gift, in other words the person following the one to receive a gift would be able to steal that gift away, if it was something they wanted.    Everyone was laughing so much there were tears and at one point  I was worried I would have to change my underwear.    My friend was impressed with the little quilt I had made for her, I have a photo of her holding it, and of course her permission to show it.     I cannot wait for the next Christmas in July. 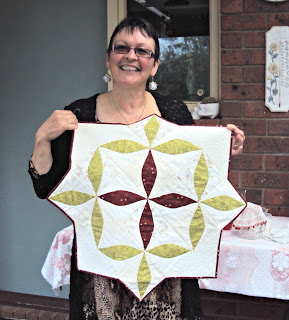